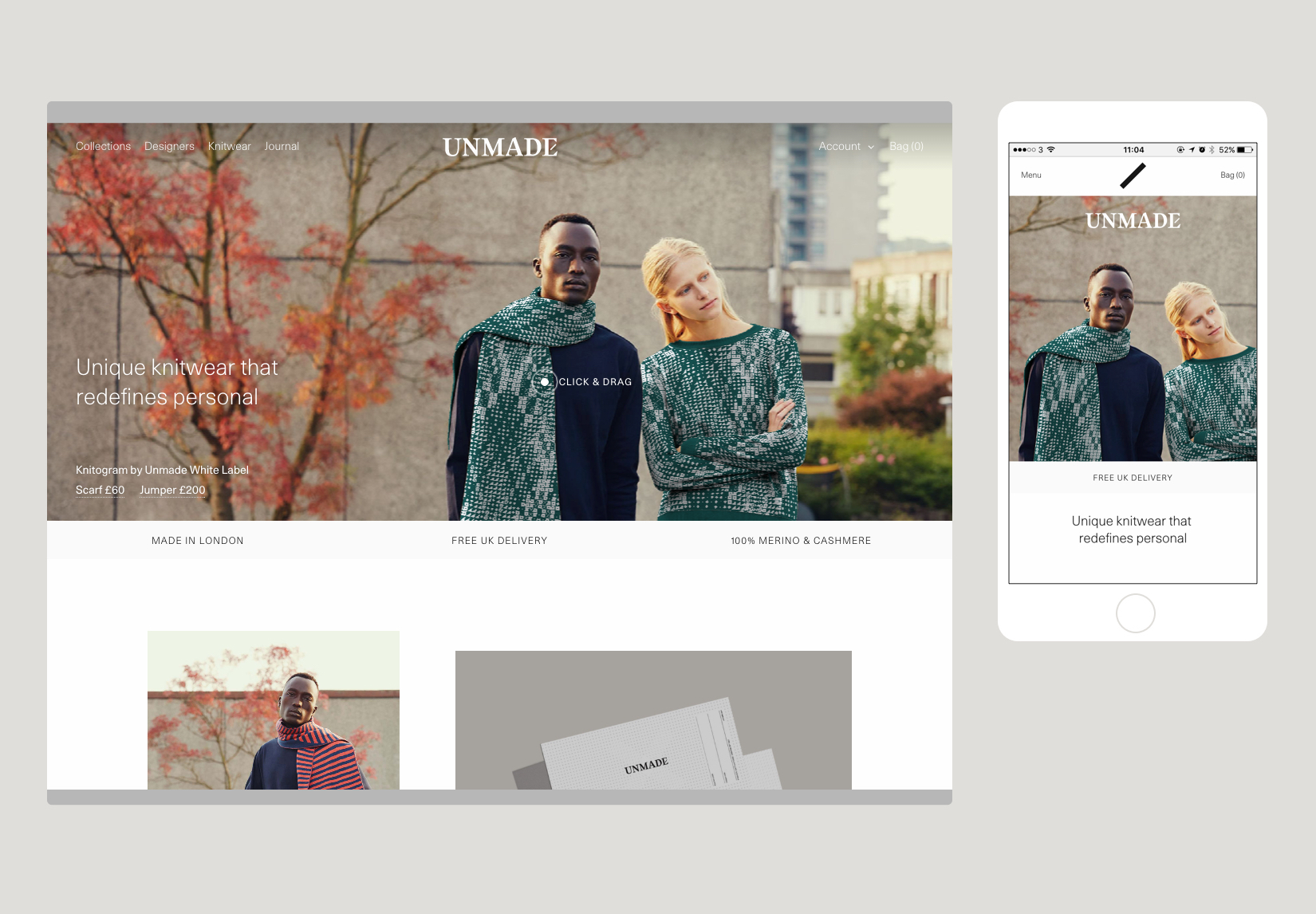 Unmade is a fashion technology start up based in London, with a new approach to the design and manufacture of clothing.

The company has written software that can control knitting machines, allowing garments to be knitted on demand. The technology is then used to give customers more choice and involvement in the creation of the clothing they buy. This reduces waste and unwanted products.

Visitors to unmade.com can adapt the colours and patterns of knitwear before they buy, giving them a chance to make a unique, one-off garment.

I worked at Unmade Studio for the second half of 2015 as part of a small, talented team responsible for delivering the company's new responsive website.

This work was done as the start up moved through a rebrand (it was formerly called Knyttan) and launched it's first concept store to establish itself as a fashion business. 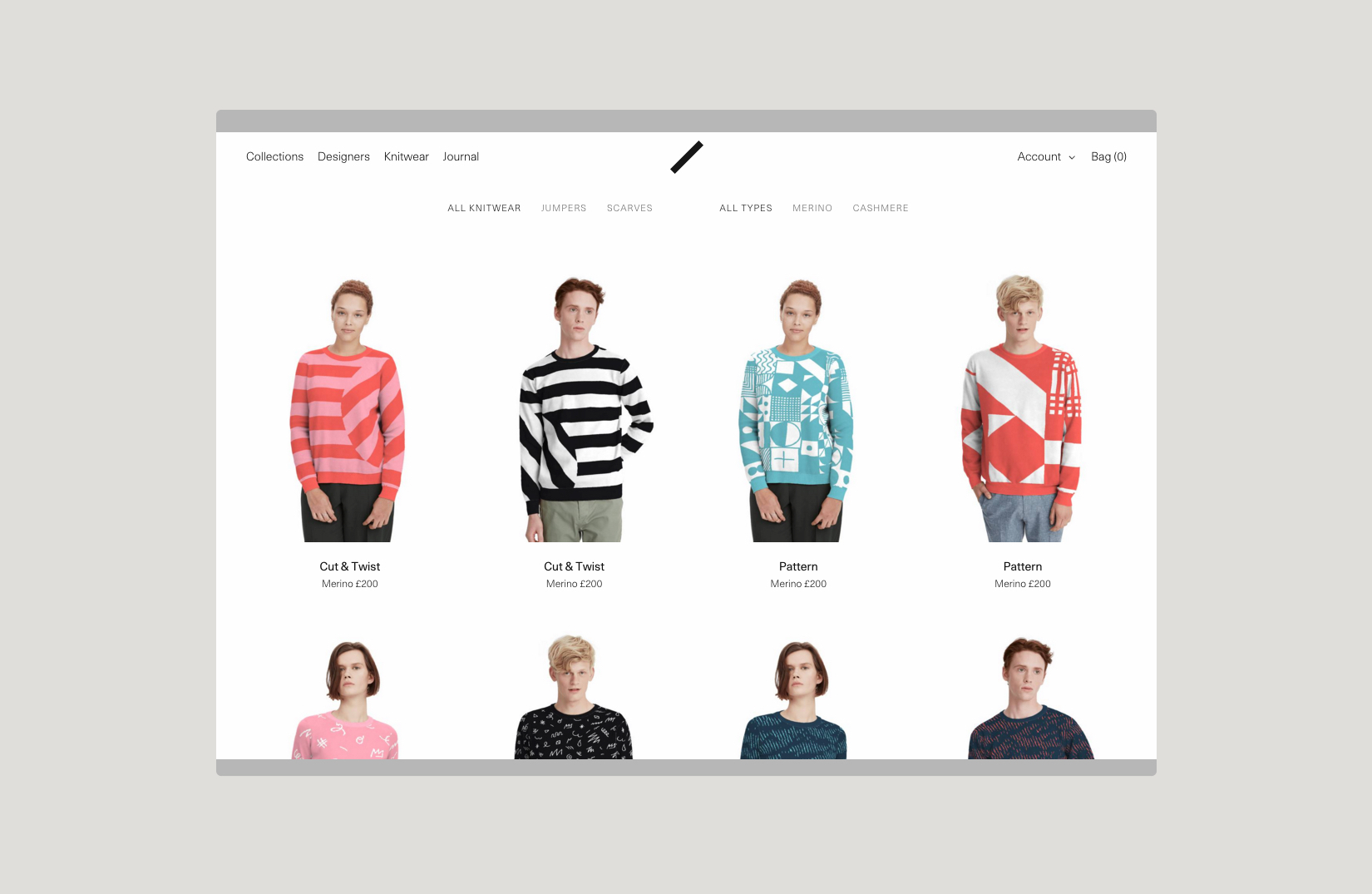 Adaptable jumpers and scarves are available in Merino wool and cashmere and are made in Somerset House, London.

My role was a broad one covering many aspects of the design process. I worked in-house alongside Unmade Studio's team and occasionally with consulting agency, FutureCorp at various points during the build up to launch.

This included interface design, planning out information architecture and e-commerce flows with developers, sketching and prototyping in code, finessing prototypes with graphic design, front-end development in production and much more. 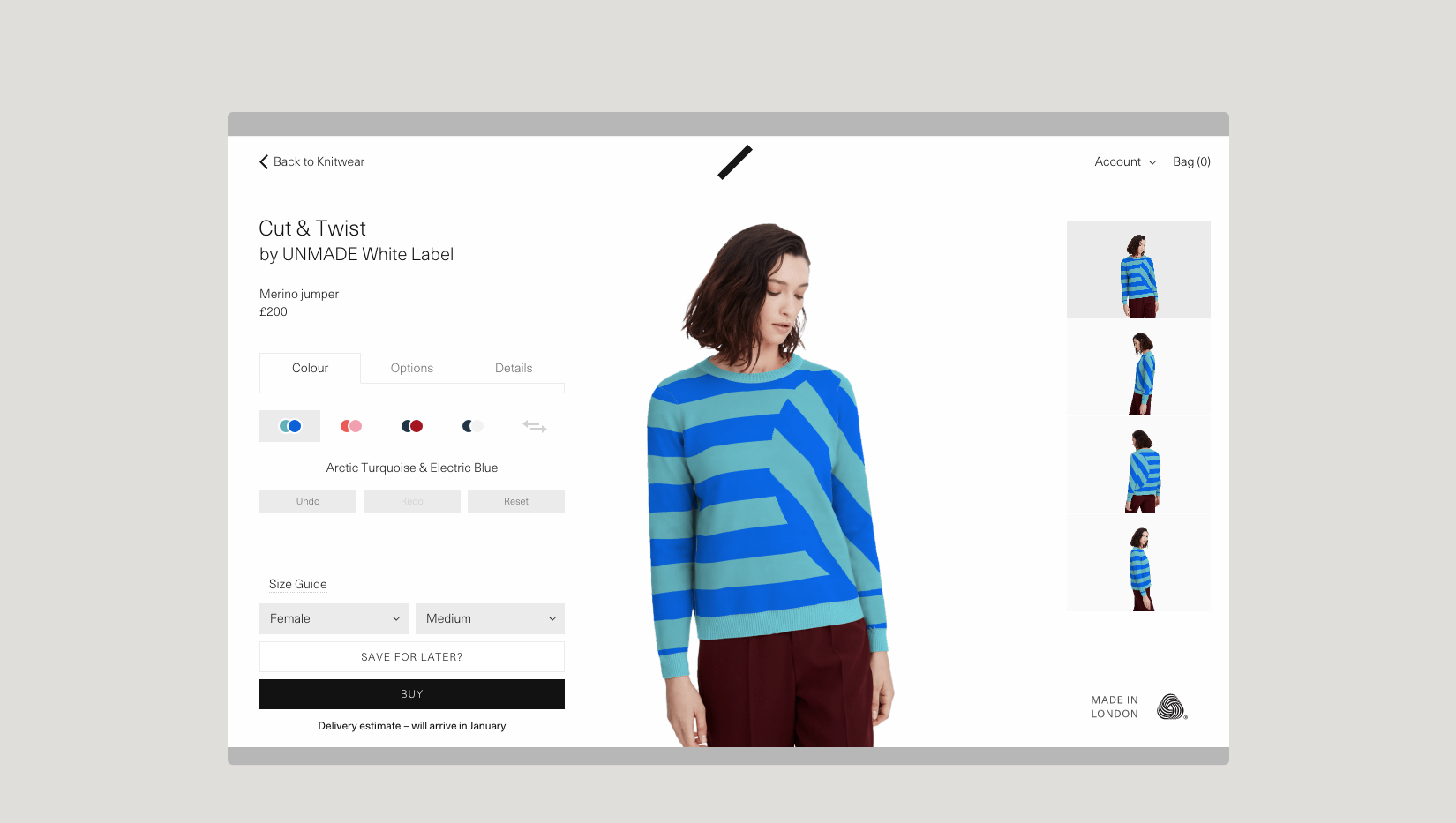 Customers can adapt the design of products before buying using the Unmade editor.

My initial focus when I started was to design and prototype what we call the editor — the interface through which the customer can adapt and co-create their garment. Our small design and development team iterated designs and prototypes, occasionally testing the interface with potential users to help uncover weak points in the UI.

It was also important to ensure at all points in the site that it's clear it is an e-commerce site and what the offering is. We wanted users to understand that there are stories behind the products, that the products are adaptable and that everything is available to buy. 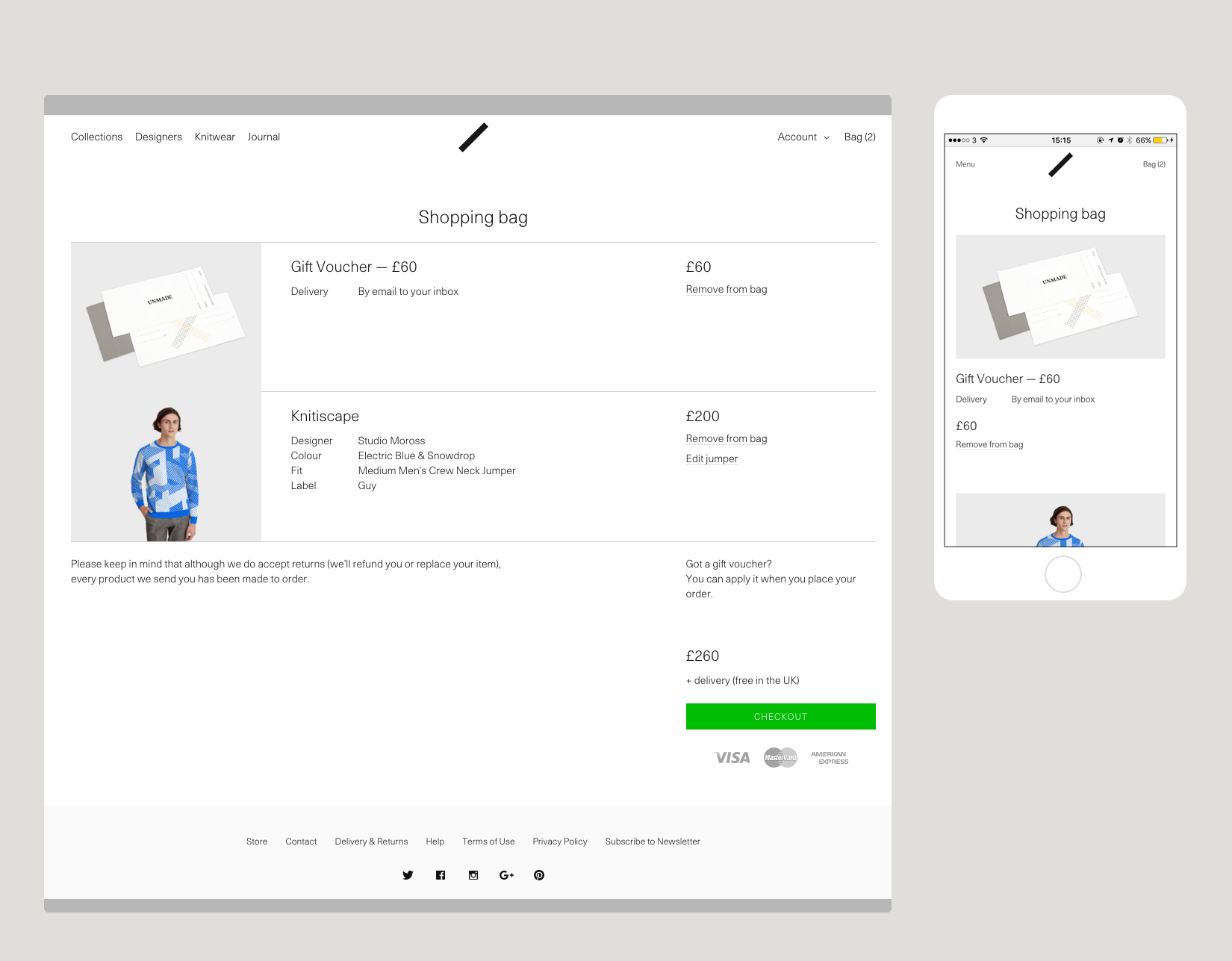 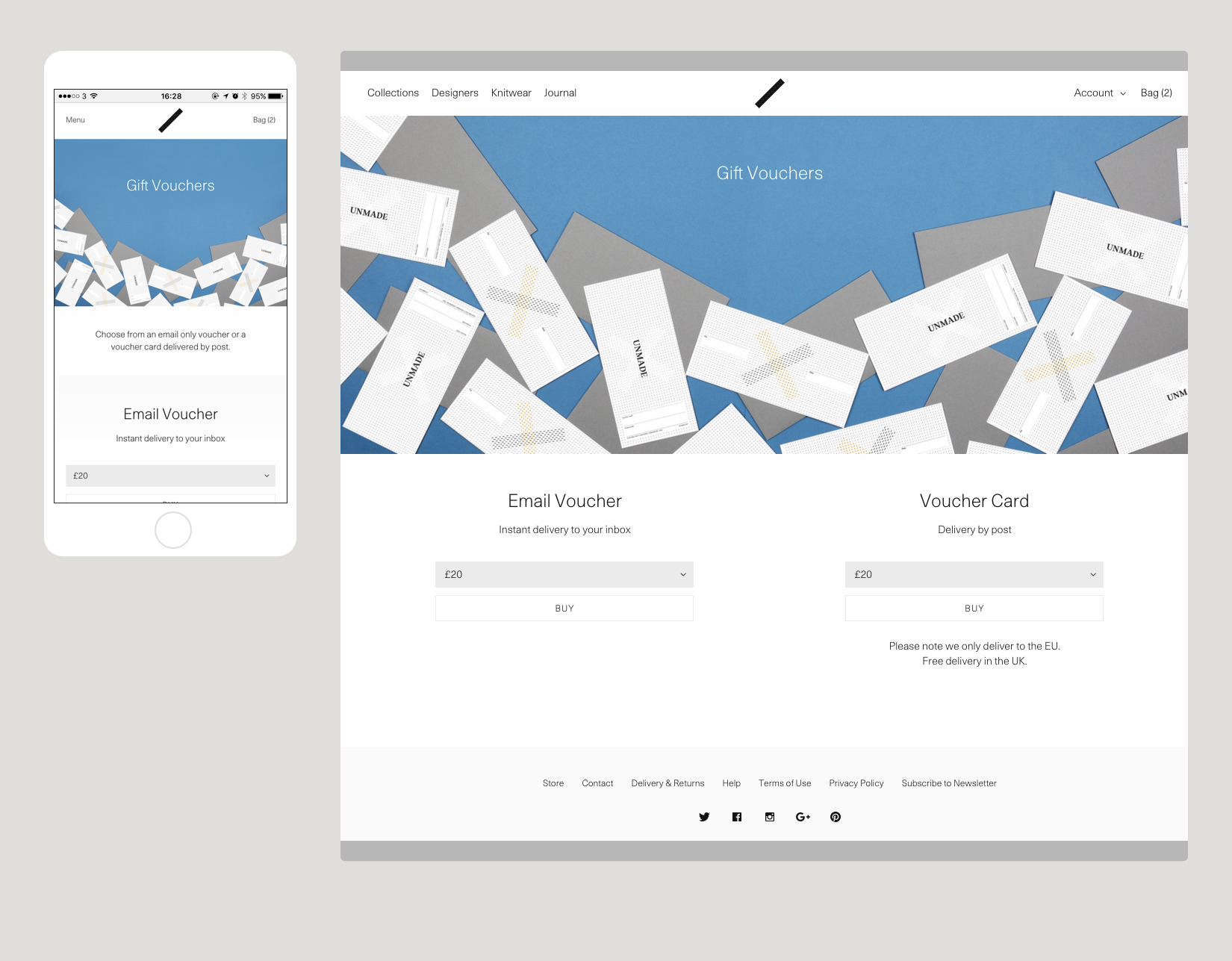 While no digital product is ever finished, the preview release of this new site was a significant milestone.

On the first day of launch, there was a notable amount of interest on Twitter with tens of thousands of visitors to the site and orders beginning to roll in.

The site has also received quite a lot of interest elsewhere online and has done a successful job of moving Unmade forward as a business as it continues to scale.

At the time of writing an Unmade concession is opening in Selfridges, London as part of the Bright Young Things initiative, which will see the company occupy a store window on London's Oxford Street.

Above: The Unmade concept store in Covent Garden, London. Customers adapt knitwear in store on the site via Apple iPads before purchase.

An animated preview can be seen below demonstrating interaction and navigation around the site. Or you can head over to unmade.com and have a play for yourself.